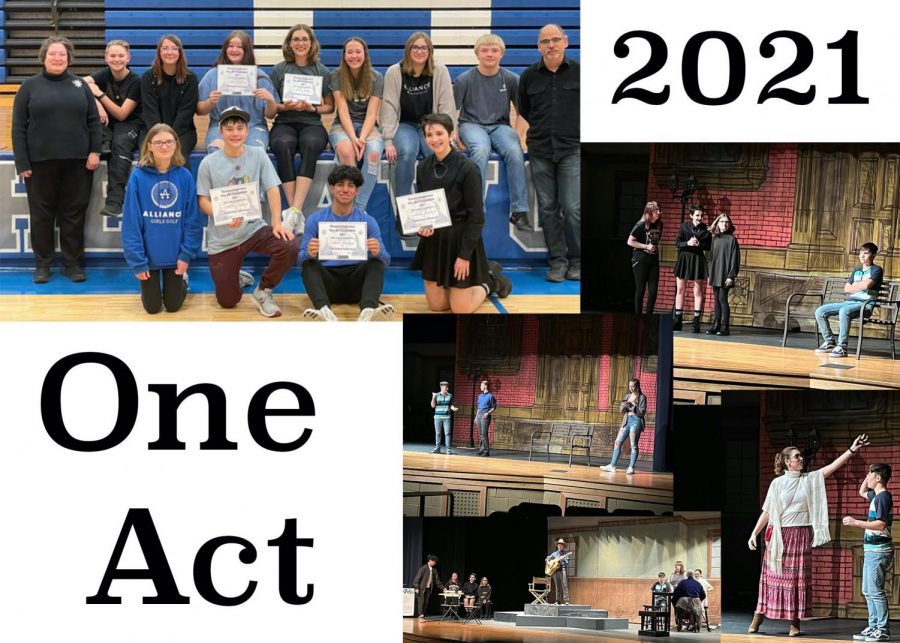 One Act is under the direction of Mrs. Mary Theresa Green, and this year, a new assistant director: Mr. Aaron Behrends. The play that the cast is performing this year is entitled Nothing Says I Love You Like Bad Poetry by Werner Trieschmann. This short, 30-minute play, tells the tale of a boy longing for love, and a girl who loves poetry. The boy goes to great lengths to prove his love for her with a meaningful poem, but will it be enough? Or will he face rejection once again? This year’s cast is comprised of two seniors: McKenna Ruffing and Donna LeMunyan, two juniors: Christian Soriano and Kailie Stone and six sophomores: Carlie Schneider, Haden Karell, Sierra Banks, Ann Ryan, Mario Rodriguez and Sonya “Lucy” Behrends. Braydon Vrbka was the only crew member, and he ran the light board. This small cast and crew of only eleven are working hard to prepare for the B-6 District competition, but some of their hard work has already paid off.

On Saturday, November 13, Western Conference One Act Competition took place at Alliance High School. Six schools from across the panhandle of Nebraska traveled to AHS to perform their shows and compete for the title of Western Conference One Act Champion. These schools were Scottsbluff, Chadron, Mitchell, Gering, Sidney and, of course, Alliance. Alliance received a Superior ranking from all three judges and placed third. “Only one point determined the second-place result,” stated Green. “Both Mitchell and Alliance were tied in rank for second place. However, the judge’s overall points decided the tie in the 2nd Place ranking:  Mitchell – 163 points, Alliance 162 points.” The Western Conference results were as follows:

In addition to Superior rankings and placing third, there were also five cast members who earned the Outstanding Performance Award. These actors were Rodriguez, Banks, Soriano, Behrends and Ryan.

To prepare for the District competition, the One Act cast is constantly practicing their performance, and being critiqued on their work. “This year I incorporated some movement activities and games to help students develop physical movement and gestures for their characters,” stated Green.

Green also added that “The AHS One-Act team will perform for the public on Tuesday, November 30, at 7:00 pm in the PAC.  There will be a small admission fee to help cover the expense of traveling to the B-6 District competition, which will be held in Gothenburg on Saturday, December 4, 2021.”

Come out and support the One Act cast at the public show if you are in town! This performance helps the students prepare for Districts by performing in front of an audience. The SPUD would like to wish the One Act team good luck as they finish out their season!