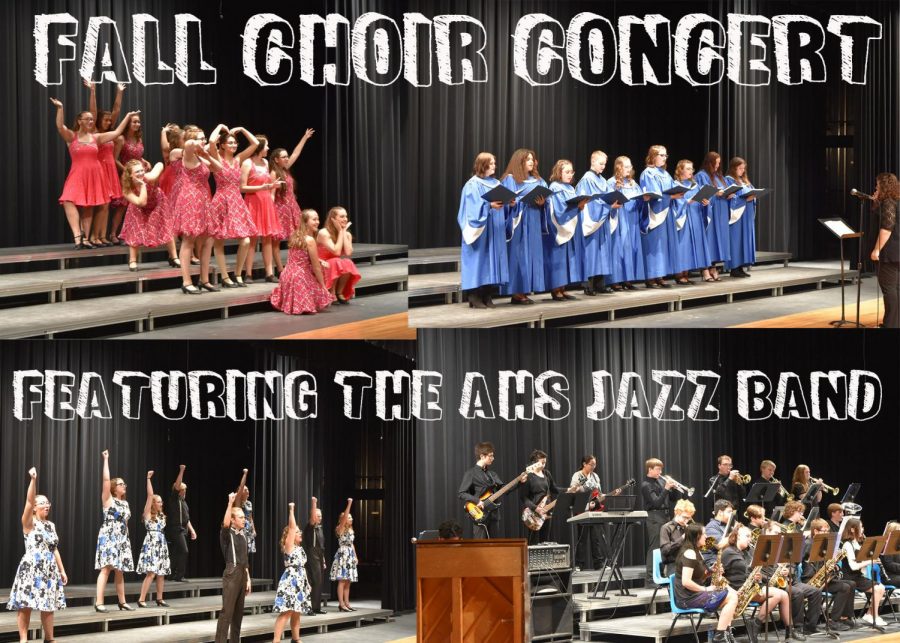 The jazz band kicked off the concert with four different pieces. The first piece was “Baby That’s What I Need (Walk Tall)” arranged by Vince Gassi. This piece featured sophomore Matthew Moomey on trumpet. “Flat Tire Shuffle” arranged by Dean Sorenson was the second piece that the jazz band played. Solos in this song were by Talan Postell, Aiden Zaro and Maddy Huss. The third piece played was the classic song “Superstition” recorded by Stevie Wonder. The band played a version that was arranged by Paul Murtha. This piece featured Moomey, Brexton Kimmel and Brayden Vrbka. The fourth and final piece played by the jazz band was “Cantaloupe Island” arranged by Mike Kamuf. Solos in this piece were played by Kimmel and Neveah Moon. The jazz band is under the direction of Mrs. Laura Mangas, but Ms. Peyton Stoike has held down the fort as Mrs. Mangas deals with a personal matter.

Mixed choir is a boys and girls standing choir. This choir performed three songs entitled “She Sings…” by Amy Bernon, “Galop” by Ken Berg and “Fly Away Home” by Pinkzebra.  Next, Velocity took the stage. This all-girls show choir sang a collection of songs from the movie Mamma Mia! This collection was arranged by Mac Huff. Soloists in Velocity were Annika Fuchs, Kasey Jensen, Carlie Schneider and Ayvrie Waldron.

Finally, it was Harmonic’s turn. The first song Harmonics performed was the iconic Dolly Parton piece “Nine to Five” arranged by Ed Lojeski. This piece featured solos by Tallan Ackerman, Mikayla Seebohm, Ariale Hindman and Jensen. “Happier” arranged by Jacob Narverud was the next piece that was sung. This piece featured Gabriel Sanders, Josh Childers, Haden Karell and Ackerman singing at the beginning of this piece. Then, the girls joined in with the guys to conclude the song. The next song was “Have It All” arranged by Roger Emerson. The final song of the night was “Invisible” arranged by Ed Lojeski. All choirs are under the direction of Dr. Christina Kloch.

With the conclusion of the fall concert, the choir is now preparing for Old West Choir Fest that will take place on November 6. After that, they will prepare for their Christmas concert.