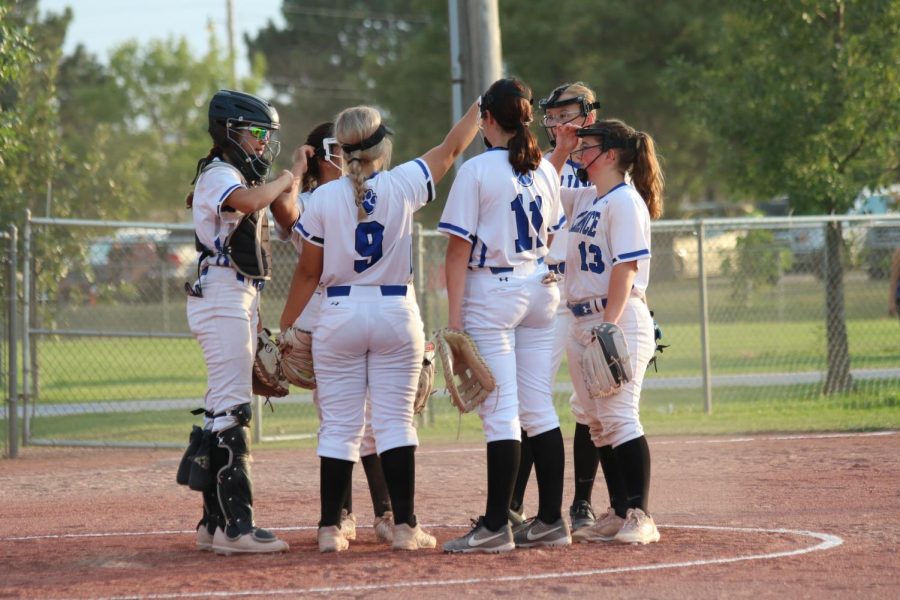 As we come back for a new school year, many activities have started back up. Fall sports are one of the many fun things that bring students together at AHS. The softball team has climbed over many obstacles to come together and compete this year. With the loss of seven seniors and the COVID-19 crisis, this young team is defying the odds and they are doing what they do best, softball.

The girls are currently 1-12; however, according to Coach Carlos Palomo they are, “improving as the year goes on but just have to put it all together as far as doing the little things right.” The softball team only has five seniors this year. When asked how he felt about his seniors this year, Palomo said, “Gibby [Payton Gibson] has been playing for four years, Keeley [Mazanec] just started the program, she stepped out of her comfort zone and tried something new. It took a lot of courage to take a shot at softball and she has improved a lot. Kids like Yohana and Andrea who just joined the program about a year or two ago. [I] tip my cap off to those kids and to everything they have done for the program. They will be missed, they have been with me since I first started coaching, [and] since I first started teaching at the middle school.”

Six-year returning coach, Palomo has high hopes for some of the underclassmen. In terms of leadership, he says, “ Its something I’ve been challenging kids to step up with and I think kids like Payton Gibson are definitely gonna help lead us in the circle. She’s a kid I feel has helped lead on the field for sure. CC Hudson, a freshman, [is] a kid who has a lot of talents, but she’s very coachable, which I love, and she has a great work ethic. She’s a kid I feel I’m gonna build around in the future. Many kids respect her and have her back. She’ll be a fun kid to coach in the future. Kids like Bri Huston, Emily Garza, [and] Morgan Moomey, [are] kids who have been in the program for a year or two, and know the expectations. [They] are definitely something to build around.”

Another senior and leader on the field is Shaylee Messersmith. Messersmith is a second baseman. When asked what she will miss the most about softball, she says, “I’ll miss being able to compete. I don’t plan to play in college, so it’s sad to think that this will be my last year of being able to go out on the field and compete in the game I love.” Despite their record, Shaylee has high hopes for the team and says, “I feel like all of the seniors are really stepping up as we decide who we are as a team. I think we could all improve on keeping our focus and keeping the energy up during games especially towards the end of long tournaments. I feel like the team has played pretty well so far, and we’re getting better with each game. It’s always disappointing to lose, but it’s gratifying to see that we keep getting closer and closer to a win.”

When asked what they needed to improve both Messersmith and Palomo said that the team is lacking in confidence. “There are some practices where I think everything is clicking,” Palomo says, “we have a great practice and you think the next day ‘this is the game we’re going to get a dub’ and then it’s the complete opposite. We just need to be more focused and have more of a positive mindset and say ‘we can compete at a high level.’ We just got to show up and have each other’s backs.” When asked about the team’s strengths, Palomo replied, “I think lately we’ve been playing pretty solid defense. We’re so young and I think everyone has been getting along and that’s been huge. Hitting has been there, but we just need to get some timely hits.”

The AHS softball team is a young team with big hearts. Their five seniors are the leaders of the school and we can’t wait to see what they do after high school. All of the SPUD wishes you the best of luck with the remainder of your season!