More Than Just a Mascot 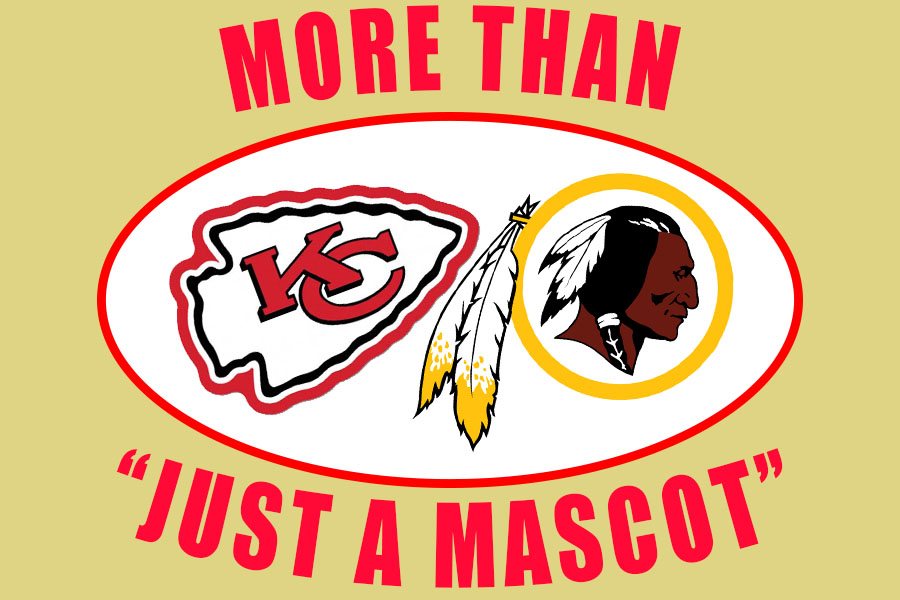 Throughout its history, the NFL has continuously walked the line with racial tension. This did not just begin with the kneeling during the national anthem that started in recent years. There is one red flag that has been heavily debated, but not as widely spoken about as it should be. This is the issue with certain mascots and team names in the NFL.

The teams and mascots in question include the Washington football team, “The Redsk*ns,” the “Kansas City Chiefs,” and a few other less directly offensive team names. Many people are unaware of the offensive nature surrounding these team names. They may think, “mascots are your pride, this is flattering to the cultures.” Actually though, it is quite the opposite. To understand this, you have to take a step back from looking at everything with rose-colored glasses. Not every sports team is as simple as just a sports team.

Mascots are often characters or animals. An entire culture and race should never be equated to that. This is why it is such an issue. People seem to ignore the fact that if a team was called “The White People” or “The Blacks” they would take it negatively. So why is it so different with these titles? Why is the continuous repression of the Native American opinion okay? These people have gone through more than enough to be reduced to a “mascot.” Many sources of media, including The National Congress of American Indians, have actually released statements regarding this issue. This one in specifics went over various points as to why these titles are offensive, and how they go deeper than basic terminology. They also released a video called “Proud To Be (Mascots)” that is very relevant to this topic that will be linked below.

Many people disregard the fact that these sports teams were not created during a time of equality between races. They were born from derogatory and offensive ideas of the past. This was the “dominant culture” of the time belittling Native culture. So these teams will always carry this meaning, regardless of any changes. As stated in an article by the NCAI, “Specifically, rather than honoring Native peoples, these caricatures and stereotypes are harmful, perpetuate negative stereotypes of America’s first peoples, and contribute to a disregard for the personhood of Native peoples.”

The team, “The Redsk*ns” is especially offensive though. This is a racial slur that is used by racists to demean Native Americans. The term “Redsk*ns” refers to when the government announced a bounty on bloody Native American’s scalps in the 1800s. This is not something to be proud of. A whole race represented by a racial slur as a mascot, in general, should not be tolerated. Not to mention, the original owner of this team, George Preston Marshall, chose this term as the name because he was a vocal segregationist and racist. He also was the leader of a group in the NFL that instituted a 13-year league-wide ban on African-American players from the NFL.

The “Kansas City Chiefs” is also offensive, even though it is not a direct slur. A Chief of a tribe is also a spiritual leader, not something to be used as a mascot. They are so much more than a person who wears a big feathery hat. Imagine if a football team was called “The Popes” or “The Dalai Lamas,” these names would not be taken well as they are offensive to religions and cultures. Many people ignore the fact that these teams were given such names in order to directly harm and belittle the Native culture. The “traditions” surrounding this team, like drumming, warpaint, and dressing as Native Americans are also extremely disrespectful. These things have a spiritual meaning and are not meant to pump a football team up.

This rich culture is so much more than a mascot and they should not be reduced to that. The Native American culture is beautiful and full of strong hardworking individuals. It is crazy that even in 2020, these cultures are fighting with this type of discrimination. You simply cannot ignore the history of these teams and what they mean to the culture they most directly affect. If people continue to have this conversation, then maybe we can take steps to tackle this issue. Until then, be sure to do your research and be empathetic of other cultures that you may not understand. Even if not by purpose, by ignoring these things you are erasing decades of oppression.