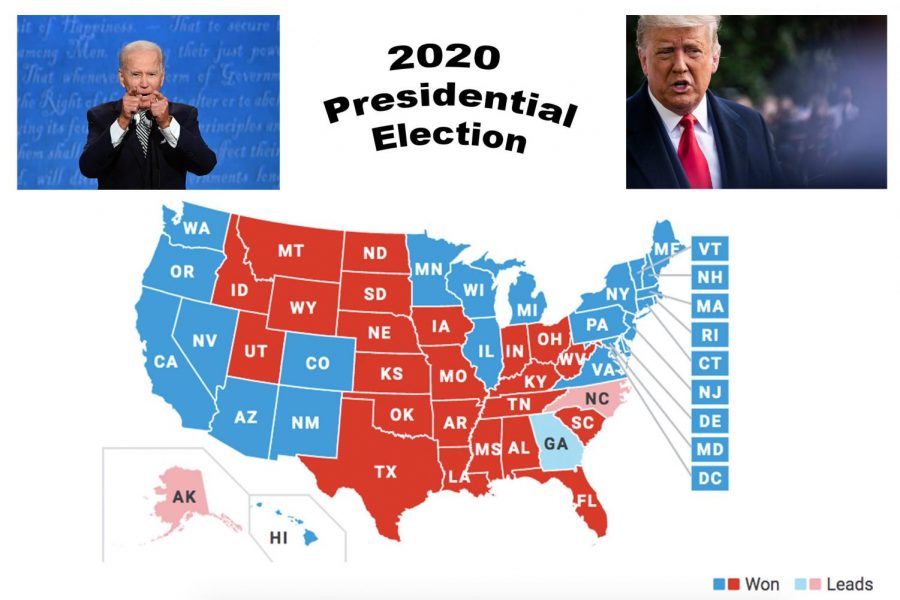 Among all of the crazy things happening in our world right now, the 2020 Presidential Election was the icing on the cake. This election was rocky, to say the least. Businesses all across America were boarding up their windows to prepare for riots. Because of the COVID-19 situation, mail-in ballots were sent out, causing confusion and panic among the American people. Because of this, the election took days longer than usual and took quite a few unexpected turns.

In the weeks before the election, several things went down. President Donald Trump and former Vice President Joe Biden had their first debate on the 29th of September, and reviews say, “It was a total disaster.” Both candidates were caught talking over each other and the moderator, and were being very unprofessional. The next presidential debate was canceled because President Trump and the first lady contracted COVID-19. President Trump ended up being admitted to the hospital for three days.  The last presidential debate occurred on October 22, 2020, and this time, the candidate’s mics were muted when the other was speaking. These debates definitely shined a light on the candidates, along with their ideals. It was a good thing that one more debate was possible because there are a lot of first-time voters here at AHS who will help define our future.

On November 3, 2020, the election started, with several red and blue states emerging quickly, while others took longer. This year the swing states were Wisconsin, Michigan, Pennslyvania, North Carolina, Florida, Arizona and surprisingly Nevada. This election took longer than others because this year, people were allowed to send mail-in ballots. Biden encouraged people to use the mail-in ballots, while Trump encouraged people to vote in person. Due to this, many states started as red, but last-minute turned blue. This is because the in-person ballots were counted first. Pennsylvania and Georgia were some of the last-minute blue states, shocking everyone around. When Pennsylvania unexpectedly turned blue and called their race, the 20 electoral votes went to Biden. This put Biden over 270 electoral votes, while Trump stayed at 214 electoral votes. Nebraska, on the other hand, stayed red; however, one of its three electoral votes was for Biden, which shocked a large majority of Nebraska.

Several media outlets have called the race, but President Trump insists on voter fraud. President Trump tweeted on November 12, 2020, “It took long enough! What is taking North Carolina so long? Are they looking for more ballots to fix that one also? Now with a recount, we will win Georgia also. Pennsylvania & Michigan wouldn’t let our Poll Watchers & Observers into counting rooms. Illegal!” But twitter acted quickly, saying that his claim for voter fraud has been disputed. Other forms of voter fraud such as the sharpie issue, the unregistered voters, and mailmen throwing out the ballots, have all been accounted for. The associated press has been constantly assuring us that the election results were legal and fair.

Biden will be inaugurated on January 20, 2021. Our newest presidential elect has a great career in politics and reaching the President of the United States is one of the greatest honors in the world. Instead of the riots that were expected, Americans are celebrating in the streets all over the country. Biden is going to be the 46th president of the United States, and we have to learn to respect him so that we can make our nation better every day.